There are reasons that some people see miracles and others don't. It's not fate or luck. It's not like lightning, where you never know when it will strike. God doesn't pick and choose; there are principles we have to follow to see His power manifest. If you don't understand that, that's one of the reasons you're having problems. But you, too, can see the miraculous power of God.

The instance where Peter walked on the water perfectly illustrates many of the truths that are essential to walking in the miraculous. This is recorded in Matthew 14:22-29.

And straightway Jesus constrained his disciples to get into a ship, and to go before him unto the other side, while he sent the multitudes away. [23] And when he had sent the multitudes away, he went up into a mountain apart to pray: and when the evening was come, he was there alone. [24] But the ship was now in the midst of the sea, tossed with waves: for the wind was contrary. [25] And in the fourth watch of the night Jesus went unto them, walking on the sea. [26] And when the disciples saw him walking on the sea, they were troubled, saying, It is a spirit; and they cried out for fear. [27] But straightway Jesus spake unto them, saying, Be of good cheer; it is I; be not afraid. [28] And Peter answered him and said, Lord, if it be thou, bid me come unto thee on the water. [29] And he said, Come. And when Peter was come down out of the ship, he walked on the water, to go to Jesus.

Notice in verse 22 that the Lord had to constrain His disciples to get into the ship. The word "constrained" means to compel or urge. In other words, this is saying that there was resistance on the disciples' part to do what Jesus said. But, to their credit, they went ahead and submitted themselves to Him. They were doing exactly what Jesus told them to do. That's one of the essentials to receiving a miracle from God. And yet look what verse 24 says:

But the ship was now in the midst of the sea, tossed with waves: for the wind was contrary.

Some people have the mistaken belief that if they are really following God, then everything should be smooth sailing. That's how a lot of people discern whether they are in the will of God. They look at their circumstances, and if everything is just perfect, then it must be God. But thinking you have missed God just because you have a problem is absolutely incorrect. This instance proves that. They were doing exactly what the Lord told them to do.

It is true that some storms are of our own making. Jonah proved that (Jonah 1-3). Jonah ran from God, encountered a storm while on a ship, was thrown overboard, and wound up in the belly of a fish. But these disciples were smack dab in the center of God's will when this storm hit in Matthew 14. I'm saying all this to point out that you can't look at circumstances to tell you whether you are in God's will. You need a word from God. You need an inner witness from the Holy Ghost that what you're doing is what God told you to do. If you don't have that, it will hinder you from seeing His power manifest in your life. When problems come, you'll feel condemned and think, I brought this on myself; I deserve it. You need to know, first of all, that you are doing what God told you to do.

Most of these disciples were fishermen on that very lake. I personally believe that the reason Jesus had to constrain them to get into the boat was because they knew that the conditions were ripe for a storm, and they didn't want to be out on the water. But if they had been thinking about the fact that Jesus had just fed 5,000 people, not including women and children (Matt. 14:15-21), then they would have expected a miracle, because they were only out there at Jesus' direction. It wasn't their wisdom. They never would have done this if it were up to them. But in the center of God's will is where you can hope to see the miraculous!

You see, Jesus was aware of their situation, and He was responsible for them being there. You might be in a situation right now where you are facing absolute disaster financially, physically, emotionally, or in your relationships. Maybe nothing seems to be working. If you are there because of your own rebellion and disobedience to God, then you need to do what Jonah did in the belly of the fish-repent (Jon. 2:1-9). You need to say from your heart, "God, forgive me. I know I've been in rebellion toward You, but right now I make a change to follow You again." Get out of rebellion and get to where you're submitting to God. He loves you and wants to set you free.

So, are you a Peter or a Jonah? If you are in the midst of a storm and you know that you are there because you've been following God, then you need to recognize that the Lord is responsible for you. Where He guides, He also provides. That's just a principle of God. Just as Jesus was aware of these disciples' plight, He is aware of your situation.

God is in the midst of the storm with you, and He's not there just as an observer. He cares for you more than you could possibly imagine. His power is present to set you free. Instead of expecting defeat, instead of meditating on tragedy, you need to expect a miracle from God. You've got to get away from doing everything in the natural and only depending upon God as a last resort. God ought to be your first resort. That's what my series on How to Become a Water Walker is all about. God has miracles He's wanting to manifest in your life. The story of Peter walking on the water is powerpacked with truths. Walk on top of your problems instead of being overcome by them.

Another powerful truth that is essential for the miraculous is that you have to be willing to get out of the boat before you walk on water. Most of the disciples were clinging to the slim hope that the boat gave them. They were in a raging storm, so it's probable that the boat was filled with water just like another time on that sea (Mark 4:37). It was foolish to step out of the boat onto the water, but that's what God told Peter to do. He had to go beyond his own ability and trust that God would keep him from sinking.

Likewise, many of us are afraid to step away from the world and out on the word that God has given us. We want the miraculous but don't want to leave the relative safety of what everyone else is doing. But just like this boat, the world is in crisis. Without the Lord, it's going to sink. Why are we so afraid to leave the mundane and trust God for a miracle? Peter was willing to risk it all.

As long as you can live without the miraculous power of God, you will. But there should be something in you that is sick and tired of being sick and tired. God made each one of us for greatness, but not greatness by the world's definition; the Lord wants to release His miracle-working power in you. He wants to make your life better than your biggest dream.

If you were arrested for being a Christian, would there be enough evidence to convict you? Sadly most Christians don't have any noticeable differences in their lives when compared to an unsaved person. That is not the way it's supposed to be. GET OUT OF THE BOAT!

God intended for mankind to live in Him. As Acts 17:28 says, "In him we live, and move, and have our being." He is absolutely supernatural. He is not limited by the things you see and experience here in this physical world. The normal Christian life is for you to be drawing upon God's ability and power. Let me put it this way: If you aren't walking in the supernatural, miraculous power of God, you are living below your privileges, in a substandard life. That might seem strong, but it's true. If your life isn't supernatural, then it's superficial. I really believe that.

Someone might say, "But Peter began to sink." That's true. But Peter also walked on the water. That's something that no one but Jesus is recorded in Scripture as doing. And when Peter began to sink, the Lord was right there to pick him up. He didn't drown, and neither will you if you get out of the natural and begin to start walking in the supernatural.

Some of you might think, Well, I don't need a miracle like this. I don't need to walk on water. What does this have to do with my situation? Of course, I'm not saying that God wants you to go physically walk on water. The significance of this is that here was a situation where it looked like the disciples might be killed and Peter was able to walk on top of what was trying to kill him. 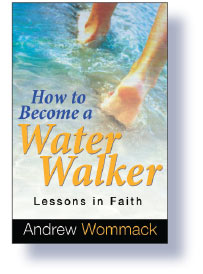 What's trying to kill you? Is it sickness? How about financial problems or marital problems? Maybe it's just the mundane. Many people are suffering from boredom. Whatever it is, God wants to release His miracle-working power in you and put you on top. But it's up to you. It's His power that performs the miraculous, but Peter didn't see that power in operation until he took a step outside of the boat.

The exact same principles that operated in Peter's life in order for him to walk on the water will work for you too! You need these principles operating in your life to receive the miraculous power of God.

I have just put my teaching on Peter walking on the water into a brand-new book. You can get this teaching as a CD or DVD series as well as this paperback book. You need to get hold of these truths. I've seen these lessons in faith help countless people. You will be blessed.